Are folks online who don’t agree with the women’s march feeling threatened or are they uninformed? Is everyone yelling so loud they aren’t actually hearing each other?

I’m seeing a lot of people online questioning the women’s march with regard to “what good is it doing?”… “Quit your belly-aching – your candidate lost, so just deal with it”… another person who I consider to be a friend said “Marching with signs and creative hashtags don’t make real changes. DO SOMETHING!!”

That’s the point, right? The marches that happened worldwide (not just in our backyard) were a gathering of like-minded people to show solidarity for HUMAN rights (women, yes, but not exclusively). They DID something that day that is pretty remarkable. It’s not a contest for which event within two days had a higher attendance. Anyone getting caught-up in that rhetoric is completely missing the point.

I think it’s part “stop being so negative” / “just get on board already”… and part “stop talking, start doing” from those who feel like they aren’t personally affected. They’d appreciate a flip of the switch to our social media spaces going back to being all cat videos and pretty pictures, but just like their platform is a place to say this, it’s also a platform to try and initiate action.

Personally, what I’m most interested in, isn’t bashing individuals or comparing this to that. I’m interested in holding on to rights that so many people have fought so hard for all these years. A friend of Hispanic descent posted this morning that no president has ever changed his life. Now, while he’s a minority, he is a man. He went to private school. He also has a brother and sister who are gay… One of which could potentially be “unmarried” with the newest supreme court justice. He thinks we’re getting too caught up in what the new president says–that we should just ignore it, and there’s no real risk there because what he says and does are two different things (it’s just “fear-based ideology”).

The risk is real.

I’ve been waffling between wanting to hide my head in the sand and not watch the trainwreck, and speaking up — like with this post. I never get political on Facebook, but felt compelled this morning to engage in the conversations. I’m not sure yet exactly how I’m going to try and make a difference other than signing petitions, and trying to explain what the movement is in ways those who are threatened (or don’t understand) can 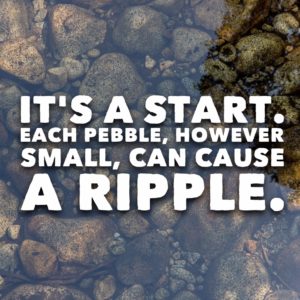 understand. But it’s a start.

I’m so proud of, and impressed by, those women AND men who marched on Saturday. Sometimes just showing up is enough, but plenty of them spent a TON of time preparing for the day. Whether you appreciated their “clever” signs and hashtags or not, at least they took some literal steps to try and not just improve women’s rights, but also to voice they’d like to help preserve some human rights.

It’s worth mentioning this day was a start of something new–those who showed up are now feeling empowered to do something when they get home, so January 21 wasn’t “it.”

And it’s not just about ranting about one powerful man with whom you disagree, or being mad your candidate wasn’t elected. It’s about all sorts of rights that are on their way to being overturned. Just this morning Trump signed an executive order withdrawing funds to international organizations if they provide safe abortions. No matter your religious views, this is obviously one of the most contentious things — access to services that have to do with reproductive rights. These rights have been in place on the federal level for 44 years for a reason.

To those who wish everyone would just quit their complaining, I say it’s highly likely you won’t have your marriage overturned. Or lose your health coverage. Or need services to do with reproductive rights. But what about your daughter or your sister-in-law? There are so many issues involved, but I just wanted to make a point…

There’s a lot at stake, so folks (not just women) are trying to be heard. It’s a reality that this executive order was put forth today, and more like it can happen, so speaking up is the only power we have as CITIZENS to try and change that.

We aren’t trying to threaten anyone else’s way of life or rights to believe a certain way. One-by-one, in their own individual ways, many are doing what they can to keep rights we have in tact, and not lose others… oh, and perhaps also trying to even the playing field while we’re at it.

One step at a time.