As I head into one of the most fun, most inspiring, most-learning-filled conferences (and weeks) of the year, it’s caused some reflection about Social Media Marketing World (SMMW), and what makes a conference great.

I also attended an amazing UN-Conference not too long ago, so I thought I’d write about what this un-conference is all about… and what the KEY things are that make #SMMW18 great.

This is my 5th year attending SMMW, and as someone who has worked in the meetings and events industry, I think I’ve attended upwards of 75 conferences in my career. I know what makes one great. Here I’m offering four ways this one does it right. 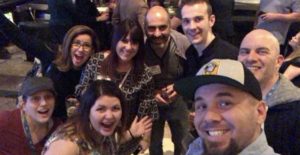 CONNECTIONS
SO helpful. Of the utmost importance for this show is helping every single attendee make the connections they’re looking for while they’re there. This effort starts in earnest before anyone gets to the convention center… WAY before. There’s a LinkedIn group for those who are registered, there’s a Facebook event where any attendee or prospect can engage with each other and the team. There are dozens of Slack channels. There are people managing the hashtag via Twitter and Instagram. There’s a dine-around sign-up to give folks an opportunity to connect with others in their space before even arriving at the conference. There’s an army of people dedicated to making sure everyone knows what they need to know, that they feel included, and feel welcome before they even arrive. They also have networking tables during lunch where everyone can chat with each other about their area of interest.

RESOURCES
In abundance. The company that puts on the show is Social Media Examiner (SME). SME does have a staff, but they also have a HUGE army of volunteers who engage with the community via all the different channels. Different staffers oversee the volunteers, and it all seems to work like a symphony. The volunteers are involved in managing the different channels in advance of the show, but they’re also the “boots on the ground” getting you registered, acting as human signage, overseeing each breakout room, etc. Needless to say, SME is also incredibly engaging via every single social media channel and Slack. It’s what they do, so it should go without saying, but so many conferences get this wrong (still)! 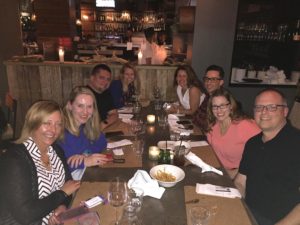 High quality. This actually goes hand-in-hand with resources, but it’s worth its own place in the list. Listen, this social media business is all so new, and EVER-changing. No one person can claim they know it all. We’re (in large part) at the mercy of the platform owners like Facebook, Twitter, and SnapChat, to name a few. Social Media Examiner’s business is to stay on top of it, and they do throughout the year with staffers like Erik Fisher and Jeff Sieh hopping on Facebook Live sometimes several times per week to break the news… and discuss what the implications are for all of us. They then parlay that into VERY carefully curating which speakers will provide the content at SMMW. You can’t really apply to speak–they ask those they see making a difference out there in the industry. Like with the most recent “Facebook apocalypse,” for example–they determined Brian Fanzo was the one who should speak on this in recent weeks, but it wasn’t on the original schedule. Being able to pivot like that is crucial in this business, and they do!

FEEDBACK
Taken seriously. I met the Event Director Phil Mershon a few years ago at the Corporate Event Marketing Association (CEMA) Summit. I shared with him I had attended the previous year, and he asked me for my feedback on the event… he has continued to ask for feedback from me and others, and I regularly see our suggestions implemented. They also survey all attendees, and I know they take it all to heart. This is only the 6th year SMMW has been held, and it’s improved incrementally every year because they care what the attendees think. As someone who has attended SO MANY conferences, this is unusual, and is probably the key reason it continues to be so good. 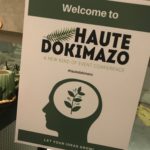 At the other end of the spectrum of a conference like SMMW is Haute Dokimazo (HD). Sounds like a Japanese meal, right? This is what some will refer to as an “un-conference,” which was created to throw all ways of planning a conference out the window. Equally awesome! And let me tell you why.

UNIQUE
Inspired founders. The three founders of this event are all event industry veterans. As one of them–Liz Lathan–said about it, “It occurred to us one day that the best part of conferences is the coffee breaks.” In other words, the moments you get speaking to people between the content often times is where there’s the most value. So they set out to create a unique event that’s all “coffee break”! They also decided to keep it to just 100 people, with the goal of having an even split between “brand” people and “suppliers.”

INNOVATIVE
Curated content. We were all given the chance to write topics that we were interested in exploring on giant post-its, in addition to offering to facilitate anything we are interested in/informed on. There were a few sessions pre-arranged, which were held while the event organizers mined through all of the post-its to 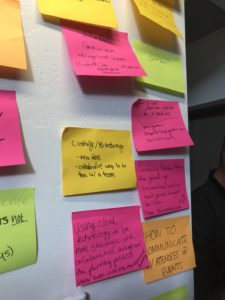 determine our sessions for the following day. All of the content was exactly what we all wanted to explore. Brilliant!

EQUALLING
No pretense. Part of the magic about HD is that we’re all wearing name tags that have just our first name on them. There’s no distinction between who’s a “buyer” and who’s a “seller.” As Annette Gregg stated, it was nice to be in an environment where there were no “sharks and minnows.” We all spoke to everyone and interacted because we were all after the same thing–simply making connections and learning from each other. I’ve never felt such a warm and inviting environment at a conference prior to this.

INSPIRATIONAL
Genuine joy. The event started with lunch… And rather than waiting in a line to get our badges for the conference, we put our first name on a “Hello my name is” tag, and were guided to a table where our host introduced us to everyone at the table. Instantly we got to know those at our table before we eventually made our way to the Children’s Museum–an incredibly fun and inspirational venue for a “conference.” At the end of the second day we then had the opportunity to share with everyone all of the positives and negatives of the event. It was incredible to give feedback in real-time vs. filling out a survey! We all left this event better people and professionals than when we arrived.

You can also listen to the Making a Marketer podcast to hear two of the founders of HD talk about its origin, and what it’s all about.

These two events are so VERY different, and equally amazing in their own ways. If you have the opportunity to go to either — or both — I highly recommend it! You’ll leave both events with new contacts and new friends. I guarantee it.