We’re approaching episode 100 of the Making a Marketer podcast (!!), and this season I decided there will be occasional episodes where it’s just me–this is the second one of this kind (check out episode 89 for the other).

Taking what seems like just circumstances and seeing it in a different way! There are so many lessons in everyday life–we need to look for them. The lessons in this one didn’t creep-up on me, y’all – they just about slapped me in the face!

Holiday adventures, lesson from football, and new year / new work are all covered.

Could This Snowed-In Story be a Metaphor for Life Choices?

Have you ever been snowed-in? As someone who grew up in silicon valley, we only had snow 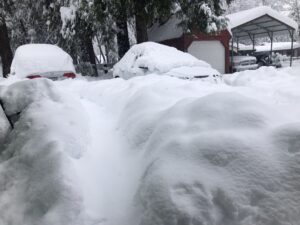 once in my childhood – and though it was just a dusting, we lost our minds, it was so cool!

I’ve had people tell me they would absolutely love being snowed-in and cut off from the world, a sort of forced tech detox, if you will. But, here’s the thing… without knowing when it will end?

The day before I was supposed to leave my brother’s house (the day after Christmas) in the lower Sierras of northern California, the snow began to fall. It was so pretty and I was really happy about it! I did not think through how I would drive away from there in my front-wheel-drive Honda Civic, but it had never snowed enough to keep me there in year’s past.

Being without power for a day and a half is also disconcerting. Thankfully, my brother and his wife have a wood burning stove that heats the house (primarily), so we stayed warm!

I found myself being so grateful for my charging brick so we could at least listen to music. I also realized I had downloaded a movie from Netflix and had some shows on my iPad, so we ended up having some entertainment! I read a lot. I colored. I slept well. 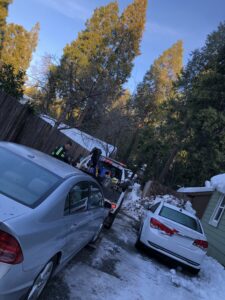 By the time I was five days into being STUCK, my brother asked if I have AAA?

Aaahhhh, and there it was, my attitude improved – I felt the grumpiness leave my body, and I was able to enjoy our quiet little new years eve (with power, gratefully!) with a renewed sense of hope for getting my car towed out… and home the next day. Now, the getting out process wasn’t easy, but I did it!

Looking back, I’m playing Monday morning quarterback on that six days! I wish I wrote more. I wish I got more introspective. It’s the whole “If I knew then what I know now” kind of thing… But that’s always easier said than done, right?

Lesson learned: I don’t do well feeling I don’t “have a way out” in any situation, so this was perhaps a metaphor to drive home this point – we should all get out (of whatever it is) earlier than we do. I didn’t want to drive on Sunday because the traffic was going to be nuts. Looking back, I should have spent the extra 2-4 hours driving home on Sunday so I wouldn’t have been stuck for almost 6 days!

So I think we can do this in our business and personal lives.

Exiting, saying goodbye — letting go of relationships, letting go of jobs, letting go of clients, whatever it is. Doing that sooner than it might feel comfortable, I think, is almost always going to yield more positive results. I think a lot of people who make change look back and say to themselves, I wish I had done this sooner.

I’m a huge sports fan, as many of you have come to realize over the years. Nothing makes me quite as happy as my team winning or as cranky as my team losing. My non-sports-fan-friends, please bear with me on this one–the lesson is life and business-related, I promise! 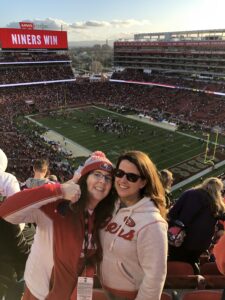 clinched home field advantage in the playoffs early, and it was so insanely exciting because they had been terrible the previous five years. This was our year! Of course, it ended with a Super Bowl loss to my co-host Jen’s Kansas City Chiefs, which was soul-crushing, but that season was such an amazing ride.

2020 was full of “you know what” and a TON of injuries. We were terrible, which got us a high draft pick for 2021. What came with that was all sorts of quarterback controversy this year.

Think whatever you like about Jimmy Garoppolo’s abilities as a quarterback, but he has led this team on and off the field with so much grace. A rookie quarterback came in and cast a shadow in a way, but it also lit up a competition the fans took to crazy levels. Jimmy never let all the noise seep in and destroy his ability to lead his team. They believe in him 100% because of his leadership. 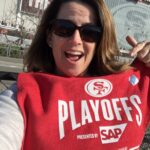 NFC West division) and winning 27-24 in overtime is epic! It really was the last 2-minutes that were so extraordinary. A monster drive that ended with a touchdown to tie the game made overtime — and a chance to win, sending us to the playoffs — a reality.

The pastor of the church I grew up in had a saying “Never give up” (I realize it did not originate with him, but that’s where I learned it). Sounds simple, but it is a

challenge in the face of adversity (he also had it put on the building, as pictured to the right!).

No question, every human on this planet has been through plenty of adversity over the past couple of years.

If we’re able to keep our eye on what we’re working towards, the key is to stay at it. If I had given up on my business when my biggest client decided to shut down his business, I would not have had all of the great experiences and new relationships built over the past four years. Simply put, it hasn’t been easy, but I wouldn’t be where I am right now, which is exactly where I’m meant to be.

Lesson here: Keep your eye on the prize and keep a never give up attitude because doors will open that you did not expect. If you give up, you don’t know what could have been.

Quick Starts Are Deceiving (aka, good things come to those who wait)

That’s actually an awesome segue to my third and final lesson for this episode.

In the last quarter of ‘21 when people told me “it looks like everything is going great for you,” I thanked them. And then I went on to explain to them “I’m a duck.” I wasn’t a duck because the water rolls off my back, but because on the surface things look cool – like I’m guiding across the water easily… but you know what’s happening under water, right?

What you can’t see is all the kicking to keep moving and find my way to what is next.

I spent the better part of 2021 – especially the last six months – searching in earnest for a new full-time professional “home.”

While also knowing podcasting is something I wanted to lean-into further, I was in search for other opportunities there also.

As I shared on the last episode, I’ve found a new professional home at Event Marketing Partners! This month it was also announced I am the host of Trade Show News Network’s new podcast, called “Trade Show Talk.” That show will also have two episodes per month, focusing on a different theme each month. We started out talking about Community and every person listening to this will benefit from the wisdom of the first two guests.

Did I mention I’m also hosting trivia weekly at a neighborhood bar/restaurant? I am.

All of this news caused someone on my Facebook page to comment “Congrats on a fast start to 2022!” to which I replied, “ ‘Fast start’ after many many months of working hard to make everything happen!!”

This brought to mind famous people I’ve heard commenting about people saying they are an “overnight sensation” – when it took them years of hard work to “get” that break!

Final lesson: Oftentimes it looks like things are just happening / coming together for people, but know that it’s extremely unlikely it happened overnight!

What’s Next for Making a Marketer?

Jen and I recorded episode 100 on Jan. 14th to accommodate our VERY amazing guest’s schedule and we can’t wait to share it with you (it will be published on Feb. 23)!! We’re keeping the person under wraps at the moment, but we will be dropping some hints in the lead-up to see if we can get any accurate guesses!

Do you have any examples of things you learned like I did over the last few weeks?

Here’s this podcast episode if you want to hear me talk everything in this post!