This notion is not new. Ever since social media emerged, we’ve heard that “we’ve never been so well connected, and yet so out of touch with each other.” Communication studies focus on all different aspects of this. More studies are trying to prove it’s improved our lives, but I’ve had some really interesting conversations recently, so I thought I’d post about it.

A few thoughts to explore…
1. Are we truly connected because of social media, and are you not being honest if you don’t share everything?
2. Is it a good or bad thing that people mostly only share the good stuff?
3. Has live-streaming (Periscope, Meerkat, Blab) changed the game on our ability to truly connect in real-time socially (putting the “social” in social media)?

Honesty (1): In the “beginning” it was so amazing to be connected to people I hadn’t seen in YEARS—first on LinkedIn with former co-workers, and then on Facebook with people I’ve been friends with throughout life. I’ve seen people face-to-face on business trips who I had been reunited with online, and I’ve continued friendships online that I developed in my travels… And it’s been awesome!

But after a while the shiny element wore off a bit, and it turned to some people sharing everything about their everyday lives. Is there such a thing as being too authentic? I’m not discounting people who share things that aren’t awesome, but are you being honest, and is what you’re sharing adding any value to your follower’s lives (or your own)? I don’t know the answer… But I do know that many of my friends who have been on Facebook are certainly interacting MUCH less than they used to, and some have abandoned it all together. The reasons vary, but I think it’s mostly because they grew tired of the over-sharing or extreme opinions that are different from their own. 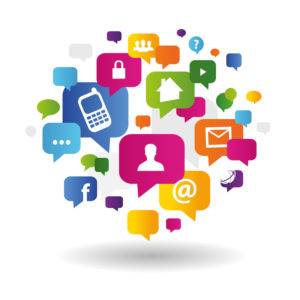 I travel a bit, and it got to a point that people made me feel like I was bragging by posting photos of my travels. Their comments may have been in gest, but like most jokes, there’s a motivation there. This caused me to not want to share – but when I told some people that I was holding back, they got mad about it! I know I have some people who want to live vicariously through me, and I enjoy sharing, but I also want my family to know I’m safe (I often travel solo).

There’s a delusion of connectedness that many of us have… People will tell me when I haven’t seen them for a while that they feel like “they’re all caught up on my life” or that they “see me traveling all over”… And they feel like we’re truly connected because of that. Most of these people proclaim to be lurkers, saying “I just read on Facebook—I don’t like or interact on there.” So, really, they’re only caught up on what I’ve posted that I’ve been doing, and not on ME as a person. AND, this communication has only been one-way. I don’t share everything, and Facebook photos and posts don’t define who I am. They’re fun updates, but they certainly don’t serve as a replacement for spending time face-to-face with my friends and family.

The Good Stuff (2): Facebook is an incredible environment for empathy. I truly believe it’s an environment where people who need it can post and get heartfelt responses from their friends and family. Hopefully it doesn’t back-fire if they don’t get the responses they hope for (FB algorithms constantly changing and all–we don’t see everything). Personally, I choose to not post much about being blue. I have posted when something crazily irritating has happened (luggage being stuck in my taxi’s trunk when on my way OUT of town for the biggest meeting of my career comes to mind!), or when I’m super mad about a customer service issue or something (Verizon). Of course, we’re all individual in our choices.

When my brother Terry passed away I chose to take a couple of days, and then I wrote a blog post. I posted the blog link on Facebook, but I didn’t make a big declaration. I’m not saying it’s bad if you do because everyone has their own journey. My life isn’t all butterflies and unicorns, but does it appear like I’m not portraying my authentic life if I don’t post the good *and* the bad? What are the limits?

Do you feel more connected to people who share the good and the bad, or does it not matter?

Live-Connectivity(3): I watched a recording of a Blab recently that spoke to the fact that authenticity is now more important than ever in light of the emergence of live-streaming. If you’ve been putting forth a personality or demeanor online that isn’t in line with your true self, you’re sure to be “busted” once you enter the foray of live-streaming.

On a talk show last week Jason Sudeikis said he doesn’t really tweet because  “I, uh, like to tweet in person,” to which the host said “Oh, so you prefer conversations – nice!” I’m inclined right off to say “Don’t we all?” But the reality is everyone isn’t comfortable networking in person with people they don’t know, or putting themselves live on video, whether recorded or live-streaming. This was one of the most interesting angles on communication that I enjoyed in my grad school program… So many people are more communicative and open online because they’re more comfortable behind the computer, but the research varies on whether the same things can be accomplished online that can be accomplished face-to-face.

The results of my thesis on the subject uncovered that people feel a combination of online and face-to-face communication is the best solution as it relates to events. Because there is true value in both, I think live-streaming does a great job of marrying the two. On Blab we’re “face-to-face” with the four people who are in the video squares, and the platform provides the ability to allow different people to pop in and out, giving their input, along with interacting with them in the chat stream.

I think the live-streaming environment provides the chance to get to know people more on a personal level (putting the “social” in social media), but it’s probably not something friends will use to stay connected because of the publicness. As it evolves more and more it will be interesting to see what people use it for both in business and personal life.

Conclusion…
What do you think? Should we filter ourselves in what we’re posting? Everyone is going to use social media in different ways, and everyone gets different value from the interactions we have on there. I personally do think our lives ARE richer as a result of social, but we need to remember to have REAL social interactions with our friends and family—and we shouldn’t assume we “know it all” because of the information we’ve learned from Facebook… There is surely MORE to know and learn about how we’re all doing, and not just WHAT we’re doing.

We can be truly connected in real life, and online.